DNS is the most critical part of the Internet Protocol; its main function is to transform IP addresses to hostnames. DNS is a stateless protocol described in RFC 1035 that uses port 53 to facilitate DNS queries on endpoints and firewalls.

“DNS may be regarded of as a globally deployed routing and caching overlay network that connects both public and private Internet,” said Dan Kaminsky, a well-known DNS security researcher. Does this raise any major doubts about DNS’s security? Is it possible that it may be exploited, resulting in a data breach? – Yes of course, DNS can be exploited in a variety of ways, using varied tactics techniques, and procedures. To begin, DNS servers employ the UDP protocol, which has lower latency and bandwidth than TCP. UDP, is a connectionless protocol, which means it doesn’t have error or flow control capabilities, and it doesn’t check for data integrity. The enemies will have an easier time carrying out their attacks as a result of this.

In this post, we’ll look at how DNS data exfiltration works, what strategies and approaches adversaries employ, and how to detect, analyse, and respond to such an assault.

DNS, as previously stated, is a connectionless protocol that was not meant to send and receive data in a client-server environment. However, because DNS identifies both delivered and received queries as genuine, it is easy to abuse this protocol to create a client-server scheme. As a result, after the initial penetration, the adversaries employ this technique to exploit the protocol and exfiltrate data.

Data Exfiltration through DNS: How Does It Work?

Queries and replies are the two sorts of messages in the DNS, and both have the same format. Various parameters in DNS have a size limit, and the size limit for UDP messages is “512 octets or less,” implying that the adversaries have 512 octets to encode the data in order to avoid detection.

Data is exfiltrated from a compromised endpoint to the threat actor’s server using the DNS protocol, as shown in the diagram below: 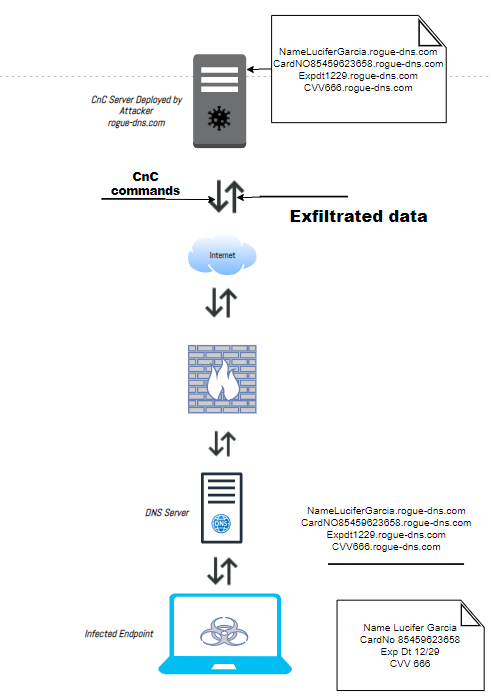 Threat actors also employ ID tagging and sequence numbering, which is highly important for tagging transactions because the sequence will help in determining which bits are names, card numbers, and CVV numbers.

The network traffic for data exfiltration done in real-time over DNS is shown in the diagram below:

Endpoint hardening might include monitoring and blocking ports like FTP, HTTP, and SSH to combat cyber-attacks. DNS, on the other hand, cannot be blocked because it is essential to create an internet connection. To detect such attacks, we must concentrate on the adversaries’ tactics, techniques, and procedures. The MITRE ATT&CK® architecture provides us with a comprehensive understanding of adversary behaviour and assists us in mapping and searching for vulnerabilities in our environment.

To begin, we must narrow down the adversaries/threat groups that may be targeting your company. We can now use MITRE ATT&CK Navigator to map the TTPs used by these adversaries in order to detect and respond to cyber-attacks. Many attackers employ the DNS protocol to exfiltrate data; examine the threat groups APT3, APT32, and Dragonfly 2.0, for example. 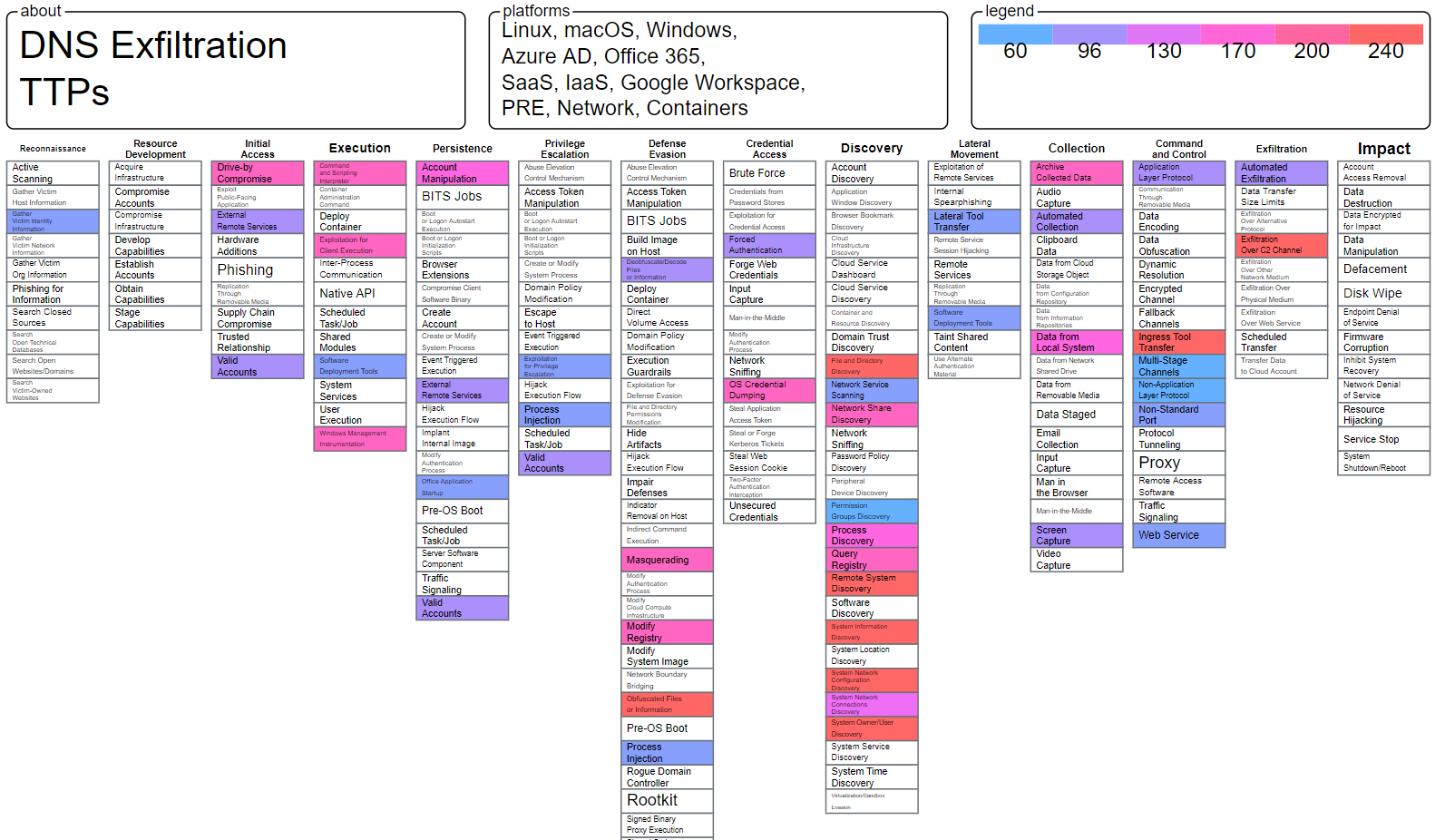 A Use case can be created in SIEM to detect and trigger alerts when the above conditions match.

Since exfiltration of data is the last stage of a cyber-attack, if alerts are triggered for a large volume of DNS traffic being initiated to the same destination from an endpoint\endpoints, it is very likely that the attackers have compromised user accounts\ endpoints and have already made a foothold in your environment.

A detailed investigation needs to be carried out to analyse the impact, collect artifacts, and then initiate the containment and remediation process.

Data is the most valuable asset on the planet, and loss or theft of data is one of the most serious threats that a business encounter. DNS is extremely powerful mechanism that applications and systems leverage to communicate with resources and services via the internet, however DNS is often neglected in terms of security as it is not examined by typical security controls. This makes DNS an ideal target for adversaries to exploit, as it may be used to exfiltrate and infiltrate data.

Security controls or network security solutions such as Cisco Umbrella, Palo Alto Network Security Platform, and others can help organisations defend themselves against these types of cyberattacks. Some examples of defence mechanisms include, but are not limited to: